Through Skype in the Classroom, in cooperation with Microsoft, or in person, we can bring the latest in Holocaust education to you.  Contact us at info@hamec.org or 215-464-4701.

Hate never takes a vacation and neither do we.

Sign with Battle-Scarred Wall – Ninth Fort – Nazi Genocide Site – Kaunas – Lithuania
(photo credit: ADAM JONES/WIKIMEDIA COMMONS)
.
Lithuania’s Jewish community and members of the expatriate Lithuanian Jewish community in Israel have expressed serious concern about possible legislation in the parliament in Vilnius which would declare that the Lithuanian state and people did not collaborate in the murder of Jews during the Holocaust.
.
Member of the Lithuanian parliament Arunas Gumuliauskas and chairman of its State Historical Memory Committee said last month that he would propose legislation to declare that the Lithuanian state did not participate in the murder of Jews because it was an occupied nation, first by the Soviet Union, and then by Nazi Germany.
.
The legislation is yet to be submitted to the parliament however, and the parliament goes into recess this Wednesday.
.
Gumuliauskas’s proposal which he said was being prepared by the committee, also claimed that the Lithuanian people could not have participated in the murder of Jews since Lithuanians were “an enslaved people” during World War II.
.
The putative legislation suggested by Gumuliauskas, who used to work as a professor of history, has been strongly denounced however as an attempt to whitewash Lithuania’s record during the Holocaust.
.
Holocaust scholar and director of the Simon Wiesenthal Center’s Israel office Efraim Zuroff said such legislation would be a “disgusting attempt to whitewash Lithuanian complicity in Holocaust crimes which was enormous,” and that the country had “undoubtedly one of the worst records of collaboration with the Nazis during the Holocaust.”
.
According to the United States Holocaust Memorial Museum, some 220,000 Jews of Lithuania’s prewar Jewish population of 250,000 were murdered in the Holocaust.
.
Speaking to The Jerusalem Post, Jewish Community of Lithuania chairwoman Faina Kukliansky said that she was disappointed by the lack of reaction to Gumuliauskas’s proposals.
.
“Someone needs to speak out. There is someone who wants to pass a law in the parliament so let’s focus on the issue and stop him. No one else should try to initiate anything similar,” said Kukliansky.
.
“If everyone is silent and smiling – it reminds Jews [of] the same situation as before the war.”
.
Kukliansky also insisted that the Jewish community had never accused Lithuania as a state or the entire Lithuanian people of collaboration with the Nazis, something she said she is now being accused of.
.
“These crimes were committed by individuals, not all Lithuanians. The Jewish community never blamed all Lithuanians were responsible. Mr. Arunas Gumuliauskas attempts once more to accuse Jews of accusing all Lithuanians. It was not a collective effort, but there were people who participated in killing Jews during Holocaust,” she said.
.
Last month, the chairman of the Association of Lithuanian Jews in Israel, Arieh Ben Ari, sent a strongly worded letter to the Lithuanian Ambassador to Israel, Lina Antanaviciene, protesting Gumuliauskas’s proposed legislation.
.
“No other country had such a high percentage of its Jewish population annihilated,” wrote Ben Ari, noting that some 95% of Lithuania’s Jews were murdered in the Holocaust.
.
“To what degrading level must a professor, chair of a distinguished committee, stoop in order to present such a recommendation to parliament?”
.
Antanaviciene noted that she had been informed by officials in the Lithuanian parliament that a draft resolution had not yet been registered and that no text for such a resolution has been prepared or submitted.
.
“Let me assure you that we are fully aware and share your concerns on the seriousness of the sensitive  issues, raised in your letter,” wrote the ambassador. 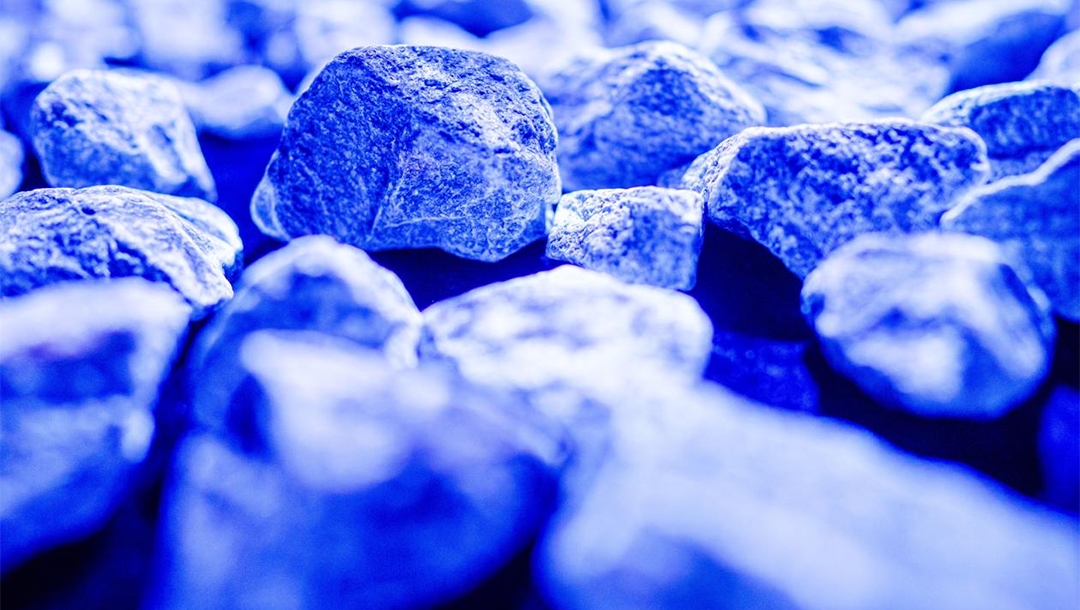 Stones glowing in the “Light of Life” Holocaust memorial display of Daan Roosegaarde in the Netherlands. (Overijssel Viert Vrijheid)

AMSTERDAM (JTA) — A Dutch artist is installing a light display commemorating the Holocaust in 150 municipalities ahead of International Holocaust Remembrance Day.

Roosegaarde chose the theme of stones because Jewish custom is to place them on the headstones of their loved ones, the GIC news site reported.

In 2005, the United Nations designated January 27 as International Holocaust Remembrance Day because that was the day the Red Army liberated Auschwitz. This year’s anniversary is the 75th since liberation.

The display lights the stones up for a few seconds at a time, “symbolizing, like breaths in the dark, the lives taken away from the community,” Roosegaarde is quoted as saying.

The display will be installed in various museums and public spaces, including the synagogue in Groningen in the country’s north. Once home to several vibrant provincial communities, the north of the Netherlands saw some of the most methodical roundups of Jews, which obliterated those congregations to this day. Of Groningen’s nearly 3,000 Jewish residents before the Holocaust, only 150, or five percent, survived the genocide, according to the Volkskrant newspaper.

The Groningen Synagogue operates nowadays as a museum with a gift shop and functions only rarely as a place of worship.

Ruth Kapp Hartz was a four year old, hidden child during the Holocaust in southern France. During that time she had to change her name to Renee to hide her Jewish identity. In addition to being sheltered by an ordinary French farm family, she spent six months in a small Catholic convent to avoid capture by both the Vichy French Police and the Gestapo. When informants told the authorities that the nuns were hiding Jewish children, the Mother Superior was forced to lie to keep Ruth and the other children safe. Only the Mother Superior knew that the children were Jewish. The other nuns thought they were just orphans.

Through Skype in the Classroom, in cooperation with Microsoft, or in person, we can bring the latest in Holocaust education to you.  Contact us at info@hamec.org or 215-464-4701.

Hate never takes a vacation and neither do we.

There’s more to learn about the Holocaust than what can be learned from history textbooks.

That’s why the Charleston Jewish Federation’s high school leadership cohort teaches students, both Jewish and non-Jewish, about the Holocaust in a different way — through real-world cultural, educational and civic activities.

Samantha Krantz, a Remember Program associate with the federation, came up with the idea for a high school cohort after meeting with Charleston and Berkeley educators earlier this year.

“We kept hearing that it’s the students that we needed to engage,” she said.

If the students are engaged and passionate about Holocaust education, Krantz said, they would be able to share that enthusiasm with their fellow students, teachers, principals and parents.

One of the goals of the cohort, Krantz said, is to connect students with resources or information to help them spread Holocaust education and awareness in their own schools.

“We aren’t, in any which way, trying to give them direct history of the Holocaust, because that’s what their teachers are doing in school,” Krantz said, “but give them more innovative ways of how to make them ambassadors in their school.”

Krantz and Erin Boynton, the federation’s development associate, posted the application for the cohort in September. Within a week, 10 spots were filled.

First-year Wando High School student Maddie Cahillane has always loved history, and when she learned about the cohort, she jumped on the opportunity to join.

“When I heard about being able to have this experience where I could go out and learn more about the Holocaust and meet people who had been affected and just enhance my knowledge, I was all for it,” she said.

The 12-student cohort meets monthly. It was formally named the High School Holocaust Teen Leadership Cohort, but the students decided to rename it to The Remember Project, Krantz said.

During the group’s first meeting in October, Krantz and Boynton asked the students if they’d ever seen or experienced anti-Semitism in their schools.

All of them said they had.

“That was really incredible to see you that they could see that they’ve all experienced something similar, and they don’t have to feel alone with that,” Krantz said.

Cahillane said the experience was eye-opening.

In October, Cahillane and 18 other Wando high school freshmen volunteered as student docents for an international traveling Anne Frank exhibit.

“When I was giving presentations I would hear crude jokes in the background, and it was awful because I’m trying to tell them about this terrible tragedy,” she said. “I’m trying to explain everything and they just wouldn’t, you know, get it in their heads that this is something that actually happened it was a terrible thing and we should not joke about it at all.”

One of the goals of the cohort, Krantz said, is to let students know they’re not alone if they’ve experienced anti-Semitism in school and maybe help guide them on how to handle it if they see it happening.

The group also provides an opportunity to teach students about the Holocaust with a broader global context. The Holocaust is sometimes taught in isolation, he said, but it relates to other challenges the world is facing today.

“There are things and steps they can do to discuss it, recognize it, and even if it’s something not as large scale as a genocide but even just bias in conversation, correcting a friend, these are things that I think our youth can learn from, talk about, and have a platform really to discuss human rights as a whole,” Beaver said.

After only a few months of joining the cohort, the group has already made an impact on Cahillane.

“I feel like I can recognize it and I can stand up for what’s right,” Cahillane said. “Because before, I didn’t know what anti-Semitism was. I didn’t know this was actually happening, I thought people had moved past this, but once you learn about it you’re like, ‘This is still going on.’”

So far, the group visited Charleston’s Holocaust Memorial in Marion Square and met with the children of Holocaust survivors. They’ve visited a Jewish-owned business and have participated in a Holocaust resource workshop.

Over the next five months, the cohort is scheduled to meet with local city officials to learn about Holocaust remembrance proclamations and host a Holocaust survivors and children of survivors meet-and-greet. In April, they’ll participate in a Yom HaShoah community event.

Since many Holocaust survivors are getting older, Krantz said, it’s even more important that young people have the opportunity to hear their stories.

“It’s up to this next generation of students to really continue on the stories that they’re hearing, because they’re probably going to be the last generation to hear from a Holocaust survivor,” Krantz said.

Next year, she hopes to have applications for the second round of the cohort available for students by August.

The students who “graduate” from the first cohort in May could help usher in the next group of students.

We are sad to share the news of that Holocaust Survivor and HAMEC Speaker, Joe Kahn, died on December 30, 2019.   May his memory be a blessing.

To view his entire testimony and why he shared his experience, click here.

To make a contribution in Joe’s memory, click here.