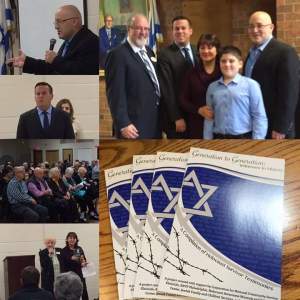 Pictured on the top right

The Generation to Generation books pictured were presented to student and Holocaust Survivor participants on Sunday, October 18.  The event was the culmination of a two year project by which teen volunteers interviewed Holocaust survivors primarily from Russia.  Those interviews were the basis of essays retelling each survival story to preserve it and make it accessible to future generations of students.  Copies of the books were presented to these students, the schools attended by the student participants and the survivors who were interviewed.  A complete copy of the book will be available on the HAMEC Web site.

WITH AN ASSIST FROM THE WHITE HOUSE, AN EFFORT TO KEEP HOLOCAUST MEMORIES ALIVE IS ONE FOR THE BOOKS